Penny – Queen for a day.

Yesterday I played a very small part in helping my friend Penny complete her  ‘Bob Graham (BG) Challenge’. Basically she ran a 66 mile lap of the Lake District which funnily enough featured none of the lakes but 42 of its highest mountains. She had to touch the summit of all 42 and that amounted to a massive 27,000 feet of climbing, (almost the height of Everest at 29,000ft!). And as if that feat alone doesn’t sound challenging enough, she had to do it 24 hours! Now just in case that isn’t quite registering let me talk you through my day……

As Penny left the Moot Hall in Keswick on Thursday at 5pm, I thought about prepping some tea for the boys and me. Later I idly packed my rucksack with egg-butties, jaffa cakes and liquorice all-sorts then kicked up my heels in bed for a bit with my alarm set for 11:20pm (that is ‘pm’ not ‘am’ you’ll notice!) My shut-eye was interrupted by many bleeps of the mobile – “her feet have wings and she’s flying down Hall’s Ridge”…..”Great Dodd done”….”Stybarrow Dodd done”…

Off to Dunmail with my pal Jess to meet Penny for the leg 3 change over. Penny arrived about 1:20am, legs one and two of the BG complete, and a flurry of activity sprung to life…. I was promptly sacked from doing the foot-rub, (I thought I was supposed to be making her laugh!) and seconded into loading my backpack with all her fluids and biscuits… and then we were off. Into the dark up Steel Fell. There was ‘Tom the nav’, ‘Jess the gels’, ‘Joe the pouch’, ‘Dave the fruit’ and me the ‘soggy biscuit’. Oh and of course ‘Queen for a Day – Penny’. We chatted along for a bit getting to know new guys Joe Hill and Dave Swift…. (Could you get any better names than that on a c.v. for BG Support?!)

Penny proved to be a very fair and indefatigable* Queen and really only tried to trip us sherpa’s up with her walking poles cos’ Tom the nav’ said that that was OK behaviour…”just drop ‘em when you don’t need ‘em” he shouted back. Charming. (*Dave supplied that adjective).

Many peaks and bogs later, with headtorches off and the dawn making a half-soaked arrival we crested Rossett Pike to get our first good view of the night; Bowfell, and Penny’s halfway point. The view didn’t last long though as into the clag we carried on, climbing…..topping……trotting…..hopping… all the way to the highest point in England, Scafell Pike. Jess, Dave and I then left Penny to do Scafell on her own and we tap danced our way down the brick road of Mickledore. (I had noticed wise words on Jess’s daughters bedroom door earlier that day… “You should always make time each day to kick up your heels and dance!”) Good advice, so dance we did, towards the delicious smell of John at base camp frying bacon.

My duty was done at Wasdale after a meager 16 miles and 10,000 feet. Penny scurried off up Yewbarrow taking Jess, Joe and Dave with her, (hang on, was that me getting the sack again!) Oh no, my turn to be nav’ and show Tom where the showers were….”err, watch out for those poles!”.

Then it was off for an ice cream at Buttermere for us, an essential part of John’s BG support ritual. Followed by me performing 4 hill starts on the very steepest part of Honister mountain pass because John wanted me to prove I was capable of later driving his car. I’d like to think it was because he thought I wasn’t 17 yet, but it wasn’t. Oh, and now he needs a new clutch!

Penny, in a flash of red, tottered in to Honister still smiling, and I was pleased to see she hadn’t hobbled any sherpa’s. More foot rubbing, (I didn’t offer!) and then off up Dalehead taking John with her; but not his car keys, a-ha!

A convoy of us set up camp at the Church in Littletown for the next Royal flash-by and we were by now basking in sunshine. John, (a different one) laughed at my geriatric attempts at climbing up on to a stone wall, so I sulked and scanned the skyline with his glasses. Here she comes. New shoes and Dallam gown for Cinderella and then she was off on her final six miles in to Keswick.

“Er, can someone help me down off this wall?”

Thankfully I managed to beat her in to Keswick using John’s trusty vehicle and dashed in to Londis to purchase a celebratory bottle of their finest. Then before we knew it, the crowds parted and to the contagious applause of bemused tourists, Penny came sprinting up Market Street before bounding up the steps of the Moot Hall. She then liberally doused the crowds with bubbly to the shout of me saying, “hang on Penny that was the good stuff” and Jess rushing to catch a last desperate dribble as she’d been abstaining for a whole week!

Oh, and some time later the clock struck five.

She’d only gone and done it. What a girl. Amazing. I will be in awe of her for Ever.

What did you do yesterday?

And in honour of Penny I unveil the epic I have been working on in my shed. I started this story some months ago with a commission from fell-running friend Helen. ‘Something with mountains and walshes”, she said.

From the beginning please…….. 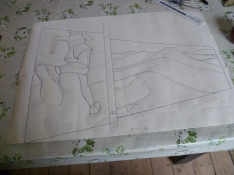 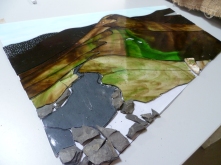 Lets put that all together and, ta-da……

And for a little bit of detail…..

This is a glass appliqué technique with a difference. Helen wants to mount the panels on her wall and so to mimic light I have appliquéd the glass on to boards I prepared with britebak foil. The light bounces beautifully off the backing creating a picture with a difference.

For authenticity i have added some real rock

and a natty piece of beach crock.

And the sole of a trusty innov8…

Come and see it for real at ‘The Silverdale and Arnside Art and Craft Trail next weekend, 28th-30thJune. I am exhibiting with a couple of friends at my home, Venue 13, (13 Shore Road, Silverdale, LA5 0TP.)

My blog is all about the stained glass projects I get up to in my shed. I promise to post regularly with fresh and beautiful jobs. Thanks for looking.
View all posts by debbiesshed →
This entry was posted in Uncategorized and tagged appliqué, Bob Graham, debbie copley, fell running, silverdale and arnside art and craft trail, stained glass. Bookmark the permalink.

4 Responses to Penny – Queen for a day.